Protecting the oceans, saving the planet

August 13, 2020
One of the consequences of the pandemic has been the postponement of crucial talks at the United Nations aimed at an agreement on a global ocean treaty. Our oceans are under immense pressure through pollution, global warming and over-fishing.  In the longer term, this is a more significant threat to life on earth.  We need to protect our oceans.

Little noticed amidst the coronavirus pandemic, 2020 marks the twenty-fifth anniversary of the Code of Conduct for Responsible Fisheries.  The progress report is grim reading. It finds that "action to meet the 17 Sustainable Development Goals is not yet advancing at the speed or scale required."
As the demand for food increases with a growing population, it presents a significant challenge to the conservation of fish stock and the ecological balance of our oceans. The fraction of fish stocks that are within biologically sustainable levels had decreased from 90% in 1974 to just 65.8% in 2017.
From 1976 to 2018, the value of global exports of fish and fish products increased at an annual rate of 4 per cent in real terms.  Total fish production is expected to expand from its current level of 179 million tonnes to 204 million tonnes by the end of the decade (2030).   The greater part of this (53%) will be from aquaculture 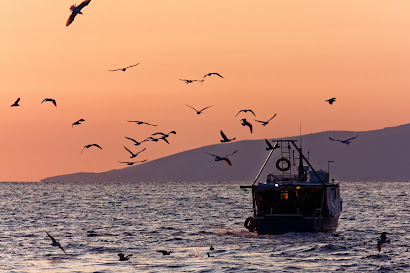 Oceans are essential to life on earth. They act as the planet's lungs, absorbing carbon dioxide, providing the oxygen life needs on Earth.  Most of this oxygen comes from tiny ocean plants called phytoplankton that float near the water's surface and drift with the currents. Like all plants,  they use sunlight and carbon dioxide to make food.  Most of the heat from global warming is absorbed by oceans, and it is estimated that warming ocean waters has killed off phytoplankton globally by 40 per cent since 1950.
Global warming increases carbon dioxide absorbed by the oceans.  Carbon dioxide reacts with seawater to form carbonic acid, causing the acidity of seawater to rise.  Ocean acidity has increased about 25% from preindustrial times to the early 21st century.  The acidity of oceans is higher now than at any point in the past two million years.
As a report from Greenpeace says:
"We need an International Ocean Treaty that set out obligations of nation-states to protect ocean life. As a report by Greenpeace says: A healthy ocean is critical to global food security, the livelihoods of billions of people, and a stable climate that can support human life. Our fate and the fate of our oceans are intimately connected. If ocean ecosystems continue to take this kind of damage year after year, the consequences will be profound and disastrous."
The UN has been edging towards just such a treaty.  If adopted, this could be a significant game-changer in protecting our planet.   We need governments to find a way to move the talks forward.  The clock is ticking.
Ray Noble is a Chartered Biologist and Fellow of the Royal Society of Biology. You can follow The Thin End on Facebook and/or subscribe for regular updates by email on the subscribe button.