Interacting with animals is known to be therapeutic,  particularly in reducing stress.  But do we consider sufficiently the effects this may have on the animals involved?   We might assume that because it is calming for us, then it must be so for the therapeutic animals, but is this so?  New research suggests that it isn't always without stress for the animals involved. 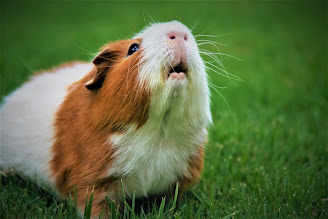 Positive human-animal interaction relates to changes in physiological variables both in humans and other animals, including a reduction of subjective psychological stress (fear, anxiety) and an increase of oxytocin levels in the brain.  It also reduces the 'stress' hormone, cortisol. Indeed, these biological responses have measurable clinical benefits.  Oxytocin has long been implicated in maternal bonding, sexual behaviour and social affiliation behaviours and in promoting a sense of well-being.

So far, so good.  We humans often turn to animals for stress relief, companionship, and even therapy.  We know from the intimate relationship we have with our pets, that this brings much joy to our lives.

New research published in Physiology & Behavior investigated whether guinea pig assisted therapy could actually be a stressful experience for our furry friends.

Researchers assessed the behaviour of 20 guinea pigs during animal-assisted therapy; in conditions including with and without places to retreat or with other guinea pigs nearby. Researchers found that across all therapy sessions, the guinea pigs reduced their eating behaviours, were more prone to startling and had an increased risk of freezing. Furthermore, the eye temperature of guinea pigs, a proxy indicator of stress, was positively correlated with the time spent being petted.

“Our research shows that being involved in animal-assisted therapy can be unpleasant for guinea pigs if not done appropriately. They should be given enough time to adapt to new settings, be given somewhere to retreat and have access to other guinea pigs to reduce the chances of stress.”

Dr Ray Noble is a Chartered Biologist and Fellow of the Royal Society of Biology, writing extensively on agency in living systems.  He is also a novelist.