The lion and the wildebeest

Birds flock, fish school, bees swarm, but social being is more than simply sticking together.  Social groups enable specialisation and a sharing of abilities, and enhances ability, learning and creating new tricks. The more a group works together, the more effective they become as a team.  Chimpanzees learn from each other how to use stones to crack nuts, or sticks to get termites.  All around us we see cooperation and learning in nature.  Nature is inherently creative.

Pulling together becomes a rallying cry during a crisis.  We have heard it throughout the coronavirus pandemic.  "We are all in this together", a mantra that encourages people to adopt a common strategy. In an era of 'self-interest' and 'survival of the fittest,'  and 'selfish gene', we lose sight of the obvious conclusion from the evidence all around us.   Sticking together is more often the better approach.  This is valid for the lion as it is also for the wildebeest.

We don't all have or need the same levels of ability.  In that sense, the extent to which genes might be involved, we share such genes as a community.  This is what we really mean when we refer to a 'gene pool'.  It is odd that we made such a fuss about 'selfish genes', yet failed to realise that, on the contrary, 'genes' are social too - they can't work without being so. 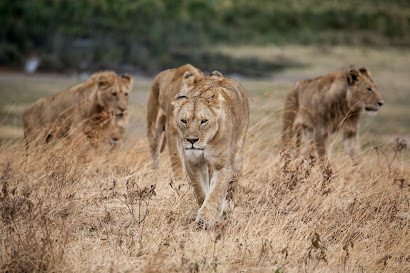 The checks and balances in ecosystems depend more on cooperation than on a simplistic notion of aggregate individualistic behaviour, or self-interest. Teamwork is the glue that holds the ecosystem together.

Ecologists studying their behaviour found that when wildebeest aggregated in clumps (close groups), the lions were less likely to catch them, resulting in a lower consumption rate for each lion than when the wildebeest lived as individuals.   When both lions and wildebeest act as a group, the kill rate falls.  But the lions don't go hungry; lions working together will share a kill.

A Pride can be as many as 30 lions living together, hunting as a team, and sharing.  When food is scarce, the pride gets smaller.  Within a pride, there is a division of roles.  The males will protect the pride and its young.  They will often be seen separated from the pride, but this is because they are defending the territorial boundary of the group.  They communicate by their roar, which can be heard over long distances.  Females are the primary hunters.  They bring down their prey working as a team, in constant silent communication with each other, fanning out to surround their target.  After the hunt, all the lions in the pride share the meal.  Cooperation works.