A badger cull is needless slaughter

“Badger hates Society, and invitations, and dinner, and all that sort of thing.” ― Kenneth Grahame, The Wind in the Willows.

News that the badger cull in the United Kingdom could be extended this year is disturbing.  Farmers are convinced that badgers transmit TB to cattle and the UK government have sanctioned culling to appease that concern.  Last year, about 35,000 badgers were killed but the Badger Trust said a leaked document showed plans to cull up to about 64,500 this year.   If this is so, then it seems odd given that a vaccine would be the better strategy.

Yet, the best way of dealing with TB spread in cattle is through a vaccine.  Evidence that culling works in preventing the spread of TB is scant, while data suggests that culling increases the spread of badgers, as they increase their home range.  Thus, culling is likely to enhance rather than reduce the risk of TB spread to cattle.

Badgers are like we humans.  They are not always socially agreeable.   Badgers tend to strut their own stuff when it comes to foraging for food.   But don't let that fool you.  Badgers are very much social creatures.  They are communicating all the time,  silently with their scent or with their grunts and coos and kackles.   They leave their scent everywhere, but it is not accidental.  It tightens the bond of their social group, their clan.  They also communicate through sounds and body language.  Their vocal repertoire is quite complex, with at least sixteen distinct sounds, from a purr, wail, chitter, right through to a grunt.  What each means would be contextual. Snorts, for example, are used when they are startled or surprised and are most commonly elicited when one badger is surprised by another.  "Don't creep up on me like that, you startled me!" 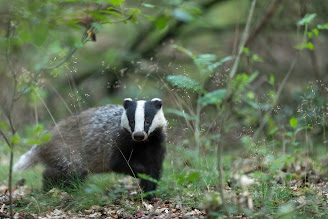 Much of this communication, particularly through the sense of smell lies behind the spread of a clan as a result of the culling.  A study published last year found that home range could increase by as much 61 per cent as a result of the cull.  Culling is a blunt instrument that is unlikely to achieve its objective other than to appease farmers who are convinced that their problem lies with the badgers, rather than husbandry.

As Lord John Krebs, emeritus professor at the University of Oxford, commented last year: “This research shows how important it is to find out about badger behaviour. It shows that culling badgers can cause surviving individuals in an area to move around more, and as a result, they could come into contact with infected cattle and help to spread TB. The ill-thought-out plan to control TB by killing badgers could therefore backfire.”

Dr Ray Noble is a Chartered Biologist and Fellow of the Royal Society of Biology, writing extensively on agency in living systems.  He is also a novelist.