Is the UK government serious about action on climate change? Recent decisions suggest not.

Over one hundred fires have been reported on carbon-rich peatland in Northern England in the last four days despite a new government ban and just weeks before the UK is due to host a major climate summit, COP26. 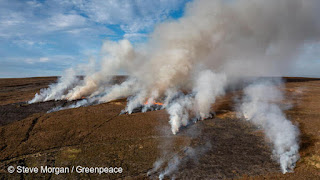 Most of the fires have taken place inside the North York Moors, Peak District and Yorkshire Dales national parks.

Wild Moors, the campaign group that collected the data and shared it with Unearthed, has recorded 109 peatland fires as of 10 October, raising questions about the effectiveness of the government ban.

Peatland is the UK’s largest natural carbon store on land, ‘locking in’ an estimated 3.2 billion tonnes, as well as providing nesting and feeding grounds for many wading birds and important habitats for rare insects and plants.

Last May, the government introduced a ban to curb the controversial practice, but it has been widely criticised for being riddled with loopholes. For example, it only applies to areas of deep peat – more than 40cm in depth – that sit within specially protected areas. These restrictions mean that only 8% of England’s peatland is subject to the ban.

In July, 105 organisations called on Boris Johnson to introduce a comprehensive ban on burning vegetation on all peat soils and extracting peat for use in compost, ahead of the COP26 climate summit.

“Since Thursday, over 100 fires have been started by grouse moors on carbon-rich peatlands — an unprecedented increase of five times the number of incidents recorded this time last burning season. It’s illogical to keep this outdated, intensive and environmentally-destructive practice afloat for the sake of a cohort of unscrupulous grouse moors who can’t break their burning habit. That’s why we’re calling on the Government to introduce an immediate and complete ban on the burning of peatland.”

“Just days before the UK is due to host a major climate summit, our largest terrestrial carbon store is on fire. And this is not a natural disaster, but an entirely avoidable one caused by grouse moor owners setting fire to their own land. It’s obvious that the government’s regulations are worse than toothless and completely failed to stop this absurd practice that damages both the climate and wildlife. A comprehensive ban should be introduced immediately along with concrete measures to fully or highly protect at least 30% of our land and seas by 2030. Anything less would be a major embarrassment for the UK government. There are better ways to welcome world leaders to a crucial climate summit than the sight of smoke and flames engulfing our largest carbon store.”

Wild Moors is working on the ground and with members of local communities to monitor the ongoing grouse moor burning season. Incidents of burning are reported to their monitoring service by eyewitnesses on an almost daily basis. Their dedicated investigators also attend moorland locations to log incidents of burning taking place. They can catalogue the scale, frequency, and location of burning on northern England’s peat moors through these channels.