Insulate Britain is back on the roads after a ten-day break.  Protestors block three locations across The City of London, including Upper Thames Street, Bishopsgate, and Limehouse Causeway. They are demanding that the government gets on with the job of insulating Britain’s homes, starting with the homes of the poorest people in the country. 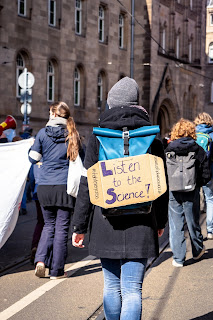 This is the fourteenth time Insulate Britain has caused disruption on motorways and A-roads as part of its campaign of nonviolent civil resistance over the past six weeks.

Frustrated drivers will get angry with Insulate Britain protestors, and some no doubt will violently pull them from the road and hurl abuse at them.  But what do they want, and when do they want it?

Of course, it can be annoying to be delayed in one's journey, and it may also have fatal consequences in emergencies. It is difficult to balance ethically.  That is true for all such forms of protest. However, stopping traffic is not a new form of protest. Truck drivers have done it; taxi drivers and farmers have done it.  How one feels about it often depends on viewpoint and perspective.  We should ask what the protesters wish to achieve.

“We know that the public is frustrated and annoyed at the disruption we have caused. They should know that one way or another, this country will have to stop emitting carbon. We can do that now in an orderly, planned way, insulating homes and preventing thousands of deaths from fuel poverty, or we can wait until millions have lost their homes and are fighting for water or starving to death.

“This treasonous government has betrayed the public. It is actively following a path that will lead to the death of millions - that’s genocide.  If you know this and are not joining nonviolent civil resistance then you are complicit. We can’t be bystanders. Short term disruption or genocide - that’s your choice.”

“I am gutted that we’ve had to return to the roads and irritate people. I am irritated too. I am a single mum, and I don’t have time to read climate science and parliamentary reports, but I’ve read the Chatham House report, and it's terrifying. Everyone should read it and ask why their government isn’t taking action necessary to defend our country from the climate crisis.

“I understand, more than most, that money is tight and many people are struggling and stressed beyond belief. It's hard to see the bigger picture when you are anxious about putting food on the table but stop and think for a moment. The people on the road are not your enemy, they are not the ones that have betrayed you and fucked over this country. They are acting out of love to protect your children and people everywhere from misery, starvation and death.”

Last week the government published their Heat and Buildings Strategy, Net Zero Strategy, and the Cost of Net Zero report.

The Heat and Buildings Strategy is not adequate to decarbonise our homes. It has revealed the duplicity of the government.  It requires major public investment.   Poorly insulated homes are the major stumbling block to energy efficiency needed to reduce carbon emissions.  The task is enormous. We need to insulate millions of old houses.  Leaving it to the market doesn't work as too many families simply cannot afford the high cost involved.  The climate emergency affects us all; it requires social action.  If ever there was a need to pull together to solve a problem, this is it.

At £3.9bn, the funding provided for 2022-2025 is a fraction of the £27bn the government plans to spend on roads. Moreover, according to the Climate Change Committee, the £450m allocated to grants for heat pumps will help just 90,000 households over the next three years - compared with the 900,000 a year needed every year by 2028.

The government proposal isn't a plan; it is a weak incentive. Where we need bold action, we have dithering and delay.  Just as with the COVID pandemic, we need to heed scientific advice and projections.

The government’s £1.75bn funding for insulating social housing and the homes of those on low income will achieve only around 4% of what the Climate Change Committee recommends we should achieve by 2035.  Just a paltry 4% of what needs to be done.

Furthermore, it breaks a key manifesto pledge made by the Conservative Party in 2019 to provide £6.3bn of energy efficiency funding for low-income families.

By focussing on heat pumps, the government has missed the fundamental importance of insulation. Heat pumps operate most efficiently when a home has a high energy performance, but most UK buildings fall well below the standard required. Insulating first will reduce energy demand and ensure that homeowners don’t pay more for their energy when they switch.   That is common sense. It is also recommended by the home heating sector: heat pumps are inefficient without adequate insulation of homes.

Writer: Ray Noble is a Chartered Biologist and Fellow of the Royal Society of Biology.