October 19, 2021
Visiting the Galapagos Islands in 1835 on his famous voyage of discovery, Charles Darwin noticed the differences in turtles he saw on each island. Furthermore, he realized that each tortoise type had traits adapted to the specific conditions on the island they occupied. Thus, the turtles provided a major empirical observation for his theory of evolution by natural selection. 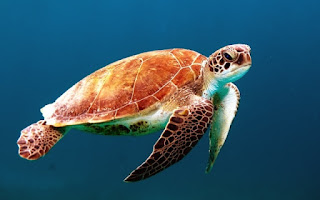 We learn so much from the Turtles. They have been around for over 220 million years, yet now they are a threatened species, and that threat is us. Today, more than half of the 360 species of turtles and tortoises are threatened with extinction.
We are killing the turtles by our egregious quest for energy and food, with habitat destruction, poaching, plastic pollution, accidental capture in fishing gear, and fundamentally climate change. Unless COP26 finds an answer and politicians are willing to act, then global warming will destroy their habitats along with so much of life on earth.
Sea turtles are the only reptiles that migrate long distances to lay their eggs on a favoured beach. As a result, they are a barometer of climate change precisely because they are sensitive to the smallest change in temperature. For example, the sex of a marine turtle is determined during the incubation of the egg on the nesting beach where it was laid, and the mix of males and females depends on the temperature of the sand.
So, with global warming, hotter sand leads to a disproportionately higher number of female turtles.  This is real, not a theoretical academic suggestion tucked away in an obscure academic paper. At one major nesting site in north-western Costa Rica, 90% of hatchlings were female.  But this is not the only threat.
Turtles lay their eggs in the sand, and rising sea levels are reducing nesting sites. Through a combination of manmade climate change and other human activity, turtles face extinction.  Turtles have evolved, adapting to change in climate and environment over generations and millions of years.  Now, they cannot adapt sufficiently fast to cope with man-made change.
Turtles have adapted in evolution to land, sea, and freshwater.  Access to water and salt balance is a key ingredient for their survival.  Arid-living tortoises have bladders that serve as water reserves, storing up to 20% of their body weight in fluids.  To regulate salt balance, sea turtles excrete excess salt from their tear glands.
It is now illegal in the UK to import or sell live wild-caught protected species of tortoises or products made from them without a permit for commercial purposes. So instead, breeders can sell only captive animals bred from parental stock in their care.  But this is far from the truth worldwide.
A recent report in 2018 on trafficking in Indonesia found 4,985 individuals of 65 different tortoise and freshwater turtle species in just seven locations over a four-month period. Nearly half of these were threatened with extinction, according to the IUCN Red List of Threatened Species.
Rising sea levels, higher tides, and increased storm events, which are more likely as the climate changes, wash away turtle nests and permanently destroy nesting beaches in the long term. Without anywhere to lay their eggs, the turtles cannot reproduce.
Photo by Wexor Tmg on Unsplash
Article: Ray Noble is a chartered biologist.
Related Articles: California Protects Leatherback Sea Turtles