For all the fish that are in the sea, the herring is the fish for me!  These are the words of a song my mother used to sing, and the whole family would join in the chorus.  But how many fish are in the sea? 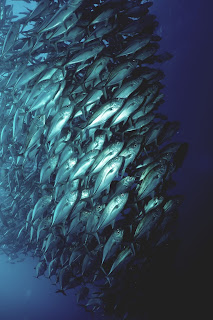 So, what about 'the fish for me', the herring? Archaeologists counting herring bones  along North America's west coast recently found evidence that herring that had been abundant for thousands of years.

Like so many, they are in decline due to overfishing.  Herring collapse has signifcant knock-on effects both for humans and for ecological balance.  Over time, there have been serveral periodic collapses.  Sometimes the recovery has been slow.

Herring is the fish for me could be a standard for seabirds, With loss of fish such as herring, the seabird population is dramatically affected.  This is certainly so for the Western Grebe that dive for carp, herring, mollusks, crabs, and amphibians, such as salamanders.  But not only does the Western Grebe suffer from loss of a major fish source, it's breeding is also impacted by human activity.  Little wonder then that the population of the Western Grebe is in decline.

So, is this what the Herring song is about? Not exactly.  The song my mum sang was about the uses we could put herring to.

Photo by Jet Kim on Unsplash