Increasing global temperatures are affecting the populations of rabbits with an increased risk of soil parasite infections.

We are used to seeing rabbits as the epitome of rapid population growth - "they breed like rabbits' - is often used as a disparaging social comment.  Even Pope Francis has used the figurative term.  Rabbit numbers have fallen by up to 80% in the UK since 1995.  That is a big fall. However, rabbits are certainly fast in the breeding league. 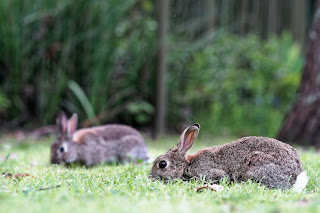 Like most fast-breeding species, rabbits don't live long.  The average life span of a wild rabbit is just two to three years, with many falling victims to predators.

It is not uncommon for the average female rabbit to have several litters in a year because gestation is only about 1 month. Thus, each litter can have three or four babies to seven, eight, nine, and sometimes more.

But even the breeding of rabbits is dependent on conditions.  If conditions are right, they will breed quickly; if not, they will breed less.  So, could rabbits be a barometer for the impact of global warming? Indeed, they can, and in some perhaps surprising ways.

One reason populations of rabbits might fall is through the spread of disease carried by parasites. Global climate change is predicted to alter the distribution and dynamics of soil-transmitted helminth (parasitic worm) infections. Yet, host immunity can also influence the impact of warming on host-parasite interactions and mitigate the long-term effects.  Studies suggest that young rabbits' less well-developed immune system allows a deleterious effect on the population because of the weaker defense against such parasites.

Photo by Fidel Fernando on Unsplash