The Thin End is more often critical of government than supportive.  But we should be supportive when governments make positive moves to protect the environment and combat climate change.

Last month plans to clamp down on illegal deforestation and protect rainforests were published by the United Kingdom government.  They went virtually unheralded in the media.   The publication is part of consultations for a  new law to clean up the UK’s supply chains.  If the government is sincere in its intent, and if they don't let them fall in the pursuit of dodgy trade deals, then they are a bold move that should be welcomed. 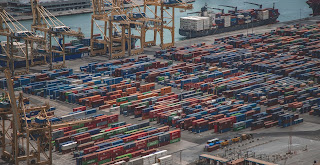 As we have repeatedly said on the Thin End, it is world trade that drives the destruction of rainforests.  This move is an acknowledgement of that fact.  How is more important than whether we trade.  Our rainforests are essential to our living planet.  So, what would the UK government's plan do?

The proposals would prohibit larger businesses operating in the UK from using products grown on land that was deforested illegally. These businesses would be required to carry out due diligence on their supply chains by publishing information to show where key commodities – for example, cocoa, rubber, soy and palm oil – came from and that they were produced in line with local laws protecting forests and other natural ecosystems.

Businesses that fail to comply would be subject to fines, with the precise level to be set at a later date.

The government acknowledge that protecting forests is central to tackling climate change, with deforestation accounting for 11% of global greenhouse gas emissions. The vast majority of deforestation – 80% – is caused by the production of agricultural commodities and most deforestation – up to 90% in some countries – is illegal. The destruction and degradation of these vital habitats also increase the risk of extreme weather events, drives biodiversity loss, and exacerbates the spread of infectious diseases.

"We have all seen the devastating pictures of the world’s most precious forests being cleared, often illegally, and we can’t afford not to act as a country. There is a hugely important connection between the products we buy and their wider environmental footprint, which is why the government is consulting today on new measures that would make it illegal for businesses in the UK to use commodities that are not grown in accordance with local laws."

Ahead of hosting the UN Climate Change Conference next year, the UK could lead the way in combatting the threat to biodiversity, the threat to our natural heritage.

The government's plan follows the establishment of an independent taskforce – the Global Resource Initiative (GRI) – formed in 2019 to consider how the UK could ‘green’ international supply chains and leave a lighter footprint on the global environment by slowing the loss of forests.

Sir Ian Cheshire, the chair of the independent taskforce, said:

"Every day, British consumers buy food and other products which are contributing to the loss of the world’s most precious forests. We need to find ways of reducing this impact if we are to tackle climate change, reduce the risks of pandemics and protect the livelihoods of some of the poorest people in the world."

"This consultation is a welcome first step in the fight to tackle the loss of our planet’s irreplaceable natural wonders such as the Amazon and in the pursuit of supply chains free from products that contribute to deforestation."

The evidence linking deforestation with climate change, biodiversity loss and the spread of zoonotic diseases is compelling. The government's new law could be an important step.   As ever, the devil will be in the detail.  We will see.