Whales talk but can we listen?

Our forests and oceans are filled with sounds.  These are not incidental, they carry meaning and significance.  If we humans stopped making such a cacophony of sound, we would better understand what these noises mean.  Hush!

We frequently wonder where people are, uncle Tom Cobblie and all.  They are there, or somewhere. We place people.  It is perhaps a part of our knowledge, a reducing of uncertainty.  We can fret about where people are and whether they are safe.  Have you seen John lately? He was very unwell.  Last I heard he is travelling somewhere.  I saw him post on social media.  This knowing or placing is a significant part of ecological integrity.   It is one reason why we make a noise, and a great deal of our language is about such knowledge. 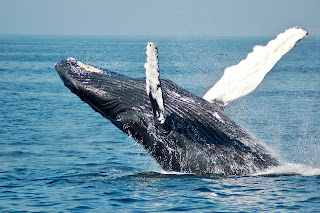 Whales use three types of sounds to communicate: clicks, whistles and pulses.   But this is a bit like saying humans use grunts, whistles and clicks.  It belies the versatility of the language.  Just as with humans, their language is cultural and contextual.  Each group of whales, or pod, has its own dialect.  They play with sound in a creative way, adding trills that will be repeated by others.  They build sound interactively, creatively using syntax. Merely analysing the sound doesn't reveal the full picture.

The humpback whale, for example, has been found to produce phrases that are combined in novel 'songs' that can last for hours.  So, does this mean that we humans could record such songs and understand what the whale is saying?  The answer is most likely not, or at least not the particularity of the message.  Perhaps we would have a better idea if we knew what it was that the whale was singing about, and to understand that we would need to be the whale or another whale who is receiving the message.  Much of what is communicated may depend on shared history or culture.  We would need to get into the dialogue.

We would also need to contextualise what it is that a whale is talking about hundreds or possibly thousands of miles away.  Whales communicate over very long distances using the properties of sound and water.  Water is their internet connection. It is our complex social structure that enables us to create meaningful language over distances, and so it is with whales.  But like the internet, the ocean is a noisy place.  Whales are adapted to this noise and can distinguish their sounds from the background din - there are, after all, billions of organisms contributing to it! All of them making themselves heard in a galaxy of noise.  But some of this noise is pollution.  It has no meaning. It is merely collateral from human activity.

Anthropogenic ocean noise, from fishing vessels, fishing, exploring for resources, construction and military operations produces a deafening cacophony of increasing sound pollution.  Does this have a detrimental impact on ocean species, and are whales losing their way as a result? Many believe so, but it is perhaps too early to be sure.

Ray Noble is a chartered biologist and a Fellow of the Royal Society of Biology.