The Orangutan - People of the Forest

These are the People of the Forest - the Orangutan, natives of Indonesia and Malaysia, inhabiting the rainforests of Borneo and Sumatra.  Their long arms and short legs, and their hands and feet are adapted for agile life in the trees.  The most solitary of the great apes, they nonetheless have an acute social intelligence, with distinctive group cultures. 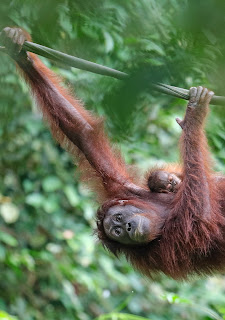 Their intelligence is shown by their sophisticated use of tools.  They are toolmakers, these people of the trees. If aliens from another world ever came to the planet earth, they would recognise this intelligence.  But another aspect of their intelligence would also be evident.  They communicate abstract concepts. This is particularly so when mothers are teaching their young.  Not only do they inform the young about the presence of danger, but they will also teach them that something that has happened was dangerous.  This, of course, is what we do with our children.
Learning isn't all work and no play.  It can be fun being an orangutan, tumbling and wrestling, tickling and laughing.  Laughter is a feature of all primate life.  Seeing the funny side of things is an important ingredient of our social being. Now that is funny.  Just as we mimic each other, so the Orangutan will mimic sounds and behaviour.  But we shouldn't love them because they are 'like us'. We should respect them because they are orangutan, the people of the forest.

Yet, they are threatened by you and me, the people of the concrete jungles.  Human activity, our insatiable appetite for land and plantation is the greatest threat to these people of the forest - poaching, habitat destruction, palm oil production, and illegal pet trade have severely reduced their numbers.

Let's not blow our own trumpet so much that we drown out that of other species.  Orangutans use tools to make sound, or at least to amplify the sounds they make.  This is one way they can enhance their communication.  The music they make is cultural, and different groups may use different tools to make sounds.

The greatest threat to the Orangutan is our activity. A major factor has been the conversion of vast areas of tropical forest to palm oil plantations in response to international demand.  The burning and clearing of forests are killing the people of the jungle.