The nonsense of Tory economic madness

October 23, 2015
Taking the Tory narrative on the economy you would be forgiven for thinking that current problems with the economy are due to 'out of control' spending on welfare.  It is a false narrative. It is a dangerous narrative because it means we are not learning from history.

The Tories set up this narrative of welfare spending so that they can do what they are ideologically good at doing - cutting social investment.  But it is more sinister.  It is a political trick that shifts the burden of the financial crisis to the poorest and enables the government to 'keep taxes low'. It aims at 'middle England'.

But it is a false narrative. If you want to see graphically what went wrong you can do no better than consider household debt.  The massive and rapid increase in household debt as percentage of incomes fuelled an unsustainable boom. Household debt-to-income shot up over the course of a decade to 170% of household income before the financial crash.  In large part it fuelled, and was in turn fuelled by rising house prices. 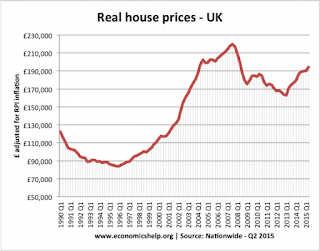 Not only was more and more money pumped into the housing market, house price inflation was fuelled by the growing shortage of housing.  It was also a 'boom' fuelled by an unfettered market. Distorted market economics pushed housing increasingly out of reach of first-time buyers.  This was a social crisis.

In the three decades following the war, construction of local government housing increased supply. It took people out of slums and provided affordable housing. It was a critical factor in the welfare state and in providing opportunities for hard working families. Home builds reached over 400,00 a year in the late 1960s. However,  with the advent of 'free market' politics from the 1980s, the government retreated from building houses, leaving it to the private sector, with only a small contribution from housing associations.  The consequences are now stark.  Families are forced now into inadequate rented homes in a relatively unfettered rented sector.  Landlords income have been fuelled by the need to support such families with rent allowances.

The Tory government seeks to solve this, not by building more social housing but by trying to force people to move with the 'bedroom tax' or simply putting a cap on rent allowance making it impossible for families to go on living in the areas where they have jobs.

No, it isn't public investment that brought about the crisis. It was the lack of it. Welfare bills rise because more and more people are forced into low paid jobs often on zero hour contracts. The welfare bill is high because rents are high and pay is low. Yet the government seeks to solve this by cutting welfare.  As well as being socially unjust, it is economic madness.