The financial crash was triggered by middle class dependency not welfare dependency.

October 19, 2015
The biggest beneficiaries of public spending over time has been the middle class not the poor. Yet it is spending on the poorest that is cut through  Tory austerity.   The middle class has been largely protected. Votes count.  The Tories have targeted the poorest.

First they created the myth that the poor are work-shy. They used the language of 'welfare dependency', as if welfare was a drug on which the poor were hooked and a dose of cold-turkey was in order.  The work and pensions secretary, Iain Duncan Smith said that cuts would be 'good for them'.  It was as if the single mother with a disabled child living on £14,500 a year had brought this on herself - if only she could be weaned off welfare, the narrative goes, she would then be able to miraculously 'stand on her own feet'.  Not only was this narrative a distortion, but the greatest beneficiaries of public funding support are not the poor but the middle classes.  But we don't call the middle class feckless. We don't set up a discriminative stereotype of dependency - and yet the middle class are dependent on pubic spending and dependent on being protected from austerity. 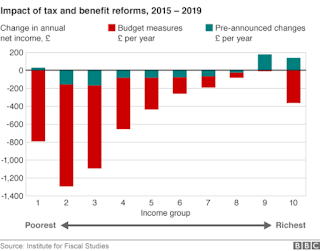 The Institute for Fiscal Studies (see figure) calculate that changes to tax credits will hit three million families, which are likely to lose an average of £1,000.  The worst affected will lose an average of £1,300 per year.  The working mum highlighted by Labour Leader Jeremy Corbyn in his question to the prime minister will lose a staggering £1,800 per year.  The IFS graph demonstrates how those on middle incomes have been protected.

When pressed on the government talks about 'changes in the round'. What they don't say is that most of these changes 'in the round' benefit the middle income groups the most.  The poor lose on the swings whilst the rich benefit on the roundabout.  Most real incentives are targeted on middle income voters.  Their 'dependency' has been protected.

Over a ten year period to 2013, the relief on income tax and National Insurance Contributions totalled a staggering £358.6 billion. The middle classes benefited from tax exemption through personal equity plans and ISAs in which they were able to accumulate savings with tax free interest. The huge expansion of higher education from the 1960s onwards created educational opportunities for their children on an unprecedented scale, whilst the opportunities for the poorest were restricted. University education remains to this day largely a middle class preserve.

Middle income groups are the biggest beneficiaries of the NHS, they have also benefited over time from scheme after scheme to help them buy their own home or incentives to save such as tax-free ISAs. They have benefited through schemes that helped them develop pension pots.  Above all they benefited from spending on education and universities.  If they had to bear the full cost of education they would realise why they are so dependent on state funding.  Even private education is on the whole supported by charitable status which cuts tax payable and reduces fees.

I put this perspective not to suggest that this public spending or incentive has not been beneficial, or that it should be removed. But we do need a more balanced perspective on the deficit. The poorest are being made to pay for the largesse to the middle class.  The least able are being made to pay for the financial crisis created by overzealous and irresponsible lending by the banks.  Since the 1980s governments transferred public debt to private debt in staggering amounts and with tax incentives for that transfer.  Borrowing went up and up and became unsustainable.  This was not the fault of the poor. It was in large part triggered by an unfettered housing market and public funded incentives to buy.  It was triggered by middle class dependency not welfare dependency.