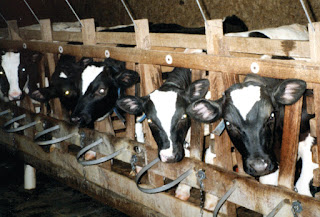 A parliamentary sub-committee warns of the potential fall in standards unless farm animal welfare is a key part of any post Brexit trade deals, particularly because many other countries have lower standards than in the UK, and in the rush for trade deals these may be sacrificed.

The UK currently has some of the highest farm animal welfare standards in the world and there is cross-sector support for maintaining those high standards after Brexit.


The greatest threat to farm animal welfare standards post-Brexit would come from UK farmers competing against cheap, imported food from countries that produce with lower standards than in the  the UK.

The sub-Committee warns that the Government's wish for the UK to become a global leader in free trade is not necessarily compatible with its desire to maintain high animal welfare standards.

The Committee found that consumers are not always aware of the difference between production systems or willing to pay a higher price for premium welfare products. This could exacerbate the challenge to UK farmers' competitiveness arising from a potential increase in cheaper imports produced to lower welfare standards.

The report also found there is an overwhelming reliance on non-UK EU citizens to fill crucial official veterinary positions in the UK.

The Committee calls on the Government to ensure that the industry is able to retain or recruit qualified staff to fill these roles post-Brexit.

"The UK has some of the highest farm animal welfare standards in the world and UK producers are rightly proud of those. We see no reason why Brexit should diminish those, as long as the Government is aware of the challenges ahead and acts accordingly.


Animal welfare may be sacrificed on alter of post-Brexit trade

"We heard evidence of undeniable concern that opening up the UK market to free global trade poses a number of issues. As we said in our last report, Brexit: agriculture, the Government may find it hard to reconcile its free trade ambitions with its commendable desire for preserving high farm animal welfare standards.

"Whilst Brexit provides the UK with the unique opportunity to review and potentially improve farm animal welfare standards, the Government will need to consider the effect of increasing standards on the competitiveness of UK producers as well the future trading relationship with the EU."

The committee also warns of a shortage of veterinarians.

Veterinarians play a key role in ensuring and inspecting farm animal health and welfare in the UK from farm to abattoir. They also play an important role in certifying animals in the context of trade.

The committee note the overwhelming reliance on non-UK EU citizens to fill crucial official veterinary positions in the UK, and call on the Government to ensure that the industry is able to retain or recruit qualified staff to fill these roles post-Brexit.


If you like this article, please help us by subscribing and getting the latest updates through the link above.