During their seasonal migration, birds typically travel between breeding and non-breeding grounds along migratory routes grouped into major flyways, such as the Indo-European flyway between Europe and the Indian subcontinent. 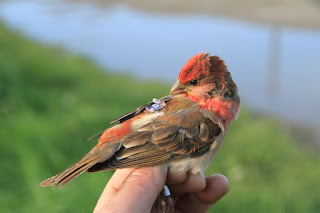 In a new study published in the Journal of Biogeography, investigators used modelling and tracking techniques to identify potential migratory barriers and corridors within the Indo-European flyway and birds’ adaptive behaviours that help with navigation along the route.

Deserts, oceans and mountains influence weather systems and resource availability and create corridors or barriers for moving animals. Risks have to be balanced against food availability and energy conservation.  Migratory birds have developed several adaptive behaviours that facilitate navigation across or around ecological barriers.  So, do they cross these barriers, or do they go round them?

“For me, the study started years ago on the coast of the German Baltic Sea. Together with two of my co-authors Roland Neumann and Benjamin Metzger, we caught and tracked Common rosefinches aiming to reveal their exact wintering locations,” said lead author Dr Simeon Lisovski of the Alfred Wegener Institute Helmholtz Centre for Polar and Marine Research in Germany.

“Years later, we found out that other researchers from across Europe did the same and that putting the tracks in perspective can yield more in-depth ecological insights than each single study could provide. Merging these tracks with flyway-wide datasets on climate and habitat has been a super insightful and exciting collaborative experience.”

Raymond Noble is a chartered biologist and Fellow of the Royal Society of biology.