Who pays for the damage of 'free' global markets?

November 14, 2015
Some of my recent blogs have been about markets. This is no exception. The point I make is that the neoliberal view of 'free markets' meeting needs is a myth.  Markets are neither 'free' and nor do they meet social needs or environmental health - the neoliberal view has no need for  'social need'. It speculates on the future without heeding the consequence. It simply considers social need as aggregate individual need.

But as I pointed out in my previous articles, social need is more than the sum of aggregate individual need, and the problem with the 'free' market is that it has no 'social conscience' - there is no market measure or price for social need.  The neoliberal wants a 'reduced State' which means substantially reduced public spending.  Many are appalled at poverty levels increasing, yet there is no market for 'ending poverty'.  Growth without social provision won't meet social need. But let's take another example - the environment.

There is an urgent need to end and reverse deforestation - I know it, you know it - but in what market can we effectively express that demand? Certainly not though price of goods, because as demand for goods increases, so does deforestation.  Did you really want that when you bought your last packet of corn flakes?

As the human population continues to grow, so does the need for more food. Rising demand has created incentives to convert forests to farm and pasture land to grow food and for biofuels.

Once a forest is lost to agriculture, it is usually gone forever—along with many of the plants and animals that once lived there. It is the major threat to bio-diversity.  Did you want that the last time you bought a bar of chocolate? 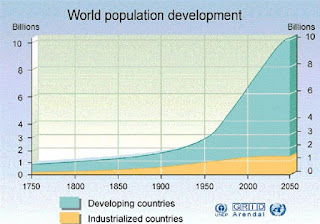 It is estimated that 15% of all greenhouse gas emissions are the result of deforestation. Yet, some 46-58 thousand square miles of forest are lost each year—equivalent to 36 football fields every minute. 17% of the Amazon rain forest has been lost in the last 50 years, mostly due to forest conversion for cattle ranching. Did you want that when you bought a can of corned beef? Deforestation is happening as I write this piece, and it will continue while you read it. 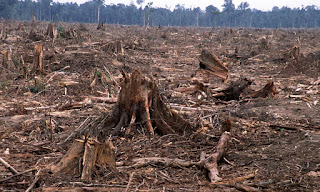 Here in the UK 85% of domestic demand for wood products is met from imports, amounting to a value of around £6 billion annually.  Sweden, Latvia, Finland, Russia and Estonia together account for nearly 90% of all UK sawn softwood imports.  We need to build more housing and this will require more wood unless other materials are used. We know that whatever we do there is an environmental impact both locally and globally.  In terms of our environmental impact we are not an island. Our choices have impact on others across the globe and on future generations. Big global corporations trade with little accountability for their impact on local environments or the social consequences of their actions.

The cost of pollution is real, but it is rarely factored into ‘production costs’. The cost of polluting now is met by future generations or by the public in clearing up the mess, or adjusting to the consequences of climate change. Those who produce greenhouse gas emissions are therefore imposing potentially huge costs on other people over time, yet our tax system doesn't reflect this.


There are essentially two ways in which ‘carbon pollution’ can be factored into costs: straight carbon tax or creating what is now called a carbon price.  But there are social costs too, such as impact on communities that are difficult to reflect in price.  They require action from government and regulation to prevent.

The Committee on Climate Change estimates that a carbon price of £30 per tonne of carbon dioxide in 2020 and £70 in 2030 would be required to meet the goal of reducing emissions by 80% in 2050. Currently, many large UK companies pay a price for the carbon they emit through the EU's emissions trading scheme. However, the price of carbon through the scheme is considered by many economists to be too low to meet  targets.

The EU emissions trading system  is a cornerstone of the European Union's policy to combat climate change and its key tool for reducing industrial greenhouse gas emissions 'cost-effectively'. The first - and still by far the biggest - international system for trading greenhouse gas emission allowances, the EU ETS covers more than 11,000 power stations and industrial plants in 31 countries, as well as airlines.

It is estimated that by 2020, emissions from sectors covered by the EU ETS will be 21% lower than in 2005. By 2030, the Commission proposes, they would be 43% lower.  In October 2013 the International Civil Aviation Organization (ICAO) Assembly agreed to develop a global market-based mechanism to address international aviation emissions by 2016, and to apply it by 2020. But many environmentalists believe this is insufficient to have impact on the growing environmental challenge.

Effectively producers are buying their pollution at too low a price and with little incentive for increased efficiency to reduce it.

In the UK the Chancellor of the Exchequer announced in the Summer Budget this year that the Climate Change Levy is being extended to apply to renewable power, effectively turning it into an energy levy. This suggests a major shift to an attempt at reducing greenhouse gas emissions by simply trying to decrease energy demand by raising taxes on consumption,  and without further policies to encourage a shift to low-carbon production.  The cost will be payed by the consumer with no incentive for the energy producer to produce cleaner fuel.

Meanwhile, the carbon price for emissions in the UK is likely to remain below that compatible with the objective of reducing greenhouse gas emissions cost-effectively.


The price of fossil fuels does not reflect their true costs, including the 'externalities' they create because greenhouse gases and other air pollutants damage health  through climate change, increased risk of heart disease, asthma and other diseases resulting from such pollution.  The price of food doesn't reflect the  true costs  of damage to the environment such as deforestation and its impact on global warming and bio-diversity. The biggest lobbyists against regulation are big businesses. Meanwhile, stock markets speculate on future price whilst failing to consider future consequences.  We are not paying the true price, but future generations will.

Human beings are a social species. We have the ability to create our environment just as we have the ability to destroy it.  We are a unique species in that we have an extended cultural history and can consider the consequences of our actions into the future.  We have choices we can only make effectively as a community, as a society, as an economy. It needs political will, not simply 'free' markets.