Let's break the cycle of poverty and disease 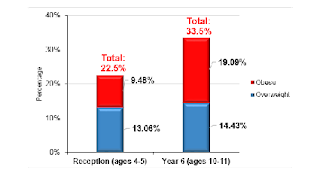 The cost of childhood obesity is an example of the short-sighted madness of Osborne's austerity programme.  The consequences of obesity on health will cost more in the long run than any saving he makes by cuts in welfare and support.  It is a foolish strategy.  The Health committees report demonstrates this in stark terms.

The government spends just £638 m per year on obesity prevention, yet the cost to the NHS of obesity and its consequences coupled with type 2 diabetes is a staggering £13.9 billion each year, and the cost to the economy is estimated at £27 bn.

The Health Committee  are right when they say that childhood obesity is a complex problem which will need action across a number of areas.  They are right to highlight excess sugar consumption, and they are right to call for urgent action to deal with it.  They call for:

All these measures are necessary but insufficient unless the underlying social problem is also addressed.

Child poverty matters - it matters a great deal because it represents a crucial link in the causes of poor health.  Furthermore, childhood obesity is a major consequence of poverty.   It we really wanted to tackle childhood obesity we would also want to tackle childhood poverty.  But let's examine what that means.  It means ending poverty.  It means creating fairness in the distribution of wealth and opportunity. It means ending poverty wages and insecure jobs.  It means creating an economy with social objectives.  It means not only being tough on childhood poverty but also being tough on the causes of poverty.  We must stop the madness of austerity.

Mr Osborne in his autumn statement boasted about being 'the builders' - 'we are the builders' he declared.  But what has he built? He has created an economy predicated on poverty wages and insecure jobs.  If we are serious about tackling poor health we would end austerity.  Investment in health and social care is the best investment for future growth and prosperity - it creates a healthy, skilled, aspirational workforce.  Social and personal aspirations go hand in hand in creating a prosperous and fair society.  The aspirational generation of Thatcher's Britain was forged in the post war welfare state, not in the 'free' market neoliberal myth of opportunity.  Social housing, better education, better health, better support - these were the foundations of fair growth and prosperity.

The impact of child poverty is transgenerational. The problems of poor health are likely to affect the next generation too. The health costs to the nation will far outweigh the relatively paltry savings made now by cutting benefits. Yet the impact of the cuts is immense.

A simple measure of the likely effect of child poverty is to consider the impact of undernourishment during development and early childhood on the risk of cardiovascular diseases in later life.

One such measure is represented in the standard mortality ratio of adults born small and undernourished compared to those born well nourished (see figure). Those born small (<5.5 pounds) and undernourished are twice as likely to suffer from diseases such as diabetes and to die early from cardiovascular disease. It debilitates and shortens productive life.

This is one of the reasons why tackling child poverty is such a critical strategy. It can break the cycle of poverty and disease. Poor health blights a generation through poor educational attainment and poor job prospects. Poverty, bad housing and undernourishment create a cycle of poverty handed on across generations. The cost of the governments policies is difficult to calculate but over time with increasing burdens of poor productivity and burdens of ill-health and its impact on NHS resources will be immense. It is a foolish policy. It blights more than a generation.  Maternal nutrition matters. Maternal poverty matters. If we really wanted to break the cycle of poverty and disease we would not be pushing more people into poverty through austerity.

It is unfair that the poorest should suffer for a financial crisis that was not of their making. It is incredulous that we should make children suffer for it. But it is also bad economics.  The government should act on the recommendations of the Health committee but it should also stop driving poverty through austerity.  We need a strategy that sees the health of people as a vital investment and not a vicarious outcome of 'devil take the hindmost' market forces. We need a government that builds society, not one that destroys it.