September 25, 2013
Have you ever wondered what your GP earns? The truth is of course that GPs compared to most of us earn a good whack. But that isn't the point. It is a high pressured, high skilled job and average GP income has been falling steadily for several years.

Figures released by the Health and Social Care Information Centre (HSCIC) show that average income before tax of contractor GPs was £103,000 in 2011/12, a drop of 1.1 per cent on the previous year, representing a continuation of the gradual fall in contractor GP incomes from their peak at £110,000 in 2005/06, the year after new contracting arrangements were introduced. Contractor GPs form the majority (around 80 per cent) of the GP workforce.


Today's report shows that average gross earnings for contractor GPs were £267,900, a 0.5 per cent increase on 2010/11. So how is it that GP income has fallen? The answer is increasing costs.

Contractor GPs pay for expenses such as premises and practice staff wages out of their gross earnings - and these costs increased more than earnings, rising by 1.6 per cent to £164,900. Almost 62% of Contractor GP earnings is taken by expenses of running the practice.

HSCIC Chair Kingsley Manning said: "This report provides a detailed insight into the income of GPs and their practice expenses, showing that the average income before tax of a contractor GP is £103,000.

The data confirm a continued gradual decline in average GP incomes and will provide a useful contribution to discussions over the remuneration of the family doctors." 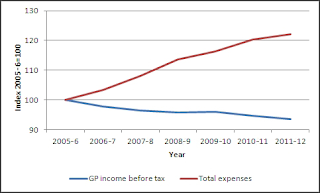 Responding to the new figures  which show a decline in average GP income, Dr Chaand Nagpaul, Chair of the BMA’s GP committee said:

“GPs are already demoralised by ever increasing and unmanageable workloads. This further pay cut for GPs while running costs increase, and the failure of the government to ensure that pay is frozen as it is with other NHS staff, will only add to this.

“Despite claims that pay is out of control there has been a 11 per cent drop in GP income since 2008, which along with increased bureaucracy has led to the current recruitment and retention crisis facing general practice.

“GPs are working harder than ever before to maintain high quality services and carry out 340 million consultations a year. However, ever increasing costs of care without adequate funding to match is unsustainable and means quality of patient care will inevitably be hit.

"The government needs to address the economic and bureaucratic straitjacket that many practices are now finding themselves in so GPs can be enabled to provide the best quality care to their patients.”